Since I want to stay optimistic and focus on my accomplishments rather than on what I haven’t reached yet, I wanted to celebrate my successes by listing everything I’ve achieved so far this year.

As I previously wrote, last year I was ready to give up. With the birth of my baby, I got new motivation to start over, and I began the year with the goal of finally revising my novel and querying again.

And so I did. But I didn’t stop there.

Here’s a list of my accomplishments so far this year:

1. Revising PULLING ME BACK IN and re-starting the query process.

Not only that, but I entered it into the contest Ink & Insights, which gave me a deadline to work toward. I will get feedback from professional writers and editors and a chance to win a cash prize.

I also got a full request and participated in pitch contests via Twitter where I got additional feedback.

At the beginning of the year, I only wanted to focus on the novel, but then I got an idea for a post and wrote it, and I’ve been writing consistently all year. I want my posts to be more personal so that I don’t have to do too much research and can write them faster. My aim is to write two posts a month, and I have enough ideas to make it happen.

I’ve already written 16,000 words (91 pages) and have begun outlining. I already have the plot structure, character arcs, and sub-plots.

Fiercely independent and happily single Karina wants nothing more than to avoid falling in love and losing herself in a relationship. But when she meets the perfect guy in Ian, she’ll fight her growing feelings and risk alienating him in order to keep her misguided status quo.

4. Writing two short stories and submitting them to contests.

I saw a prompt for the contest Literary Taxidermy and thought, why not? I’d never written a short story and wasn’t sure if I could do it. I’d also never written “on command”, so to speak. Usually, I get the ideas and then download them to paper.

The premise of the contest was to use the first and last lines from another work and make them your own. I chose the lines from “A Telephone Call” by Dorothy Parker.

These lines inspired me to write THE JEALOUSY GAME. I’m really proud of it and can’t wait to share it once the winners are announced.

Pitch: A devoted wife waits for a phone call from her cheating husband as a proof of love in order to decide whether or not to sleep with her ex-boyfriend.

Another contest prompt, The Moment it Hit Me, gave me the idea to write a story related to Avoiding Love. I submitted SINGLE, NOT ALONE to the contest and also to a submission call for a Women’s Anthology by TL;DR Press.

Pitch: After her boyfriend totals her car while drunk, a woman afraid to be alone must choose whether to continue in a bad relationship or put herself first and face her fears head-on.

5. Updating my website’s look, with more planned in the future

I changed my theme and have been working hard on re-branding and really focusing on my niche and how I want to represent myself.

Although I’m proud of all these accomplishments, I was only able to do so much by sometimes sacrificing exercise, sleep, and time with my family, which I don’t want to have to do anymore. I will follow my self-care plan and try to find balance in my life.

For the second half of this year, my main goals are:

1. Reaching 100 queries sent for PULLING ME BACK IN.

This is the magic number to query before considering to stop. So far, I’ve queried 37 agents. That means I have 63 more to go. I will use the feedback from the Ink & Insights contest to revise what’s needed and use my new query to try again.

I can then focus next year on revising it and querying it if I haven’t landed an agent until then.

Anything else on top of that would be a bonus. I want to set smaller goals so that I don’t push myself too hard. I know my baby won’t sleep as much during the day as she gets older and that I’ll have less time to dedicate to my writing, but that’s okay. Every little bit I can do will be a success.

What are your biggest accomplishments so far this year? 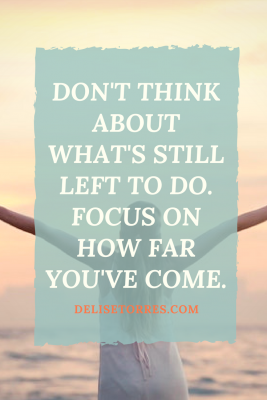 Photo by Oleksandr Pidvalnyi from Pexels