Many people set out to write a novel and never finish it. Even though publishing my book seems far away, I should feel proud that I’m not one of those people. It was a lot of work and it took me a lot of time, but I finished. I now have a completed novel that I love and can read over and over. This is a success that should be celebrated.

Following are ten tips and some resources that helped me go from idea to first draft to a completed manuscript ready to be submitted to agents. I hope this post will help anyone starting out, who, like me, has no idea what they’re getting themselves into.

Disclaimer: there are many ways to finish a novel, this is just what worked for me. I also want to add that I was a bored housewife with nothing to do, so I could dedicate a lot of time to my writing.

The idea for my novel had been with me for a long time. It had a beginning, middle, and end, and every now and then, I would revisit it in my head and change/add things. One day, out of depression and boredom, I wrote it down, and it just flowed out of me. Originally, I only set out to write what was in my head, with no other objective, but as I read it, I became excited to write a more cohesive story. Since I’d never done any creative writing, I had no idea how to go about it.

2. Learn about the craft

Even though I planned to write a short story that would be just for me, I’m a perfectionist, so I wanted to do the best job I could. Plus, I was bored and love learning new things. I looked online and read everything I could about the subject. The folks at Bubblecow outlined their tips for newbies, which really helped me grasp what was needed to write good fiction.

I think it’s important to learn about the craft so that you can avoid all the major mistakes and have the greater chance of success. It will help a lot in the re-writing stage.

After reading about the “writing rules”, I became discouraged. Writing fiction was not as easy as I thought. How could I, a scientist, ever manage it?

This book is what really motivated me to write. His simple advice: if you want to write, just write. That’s all you need. No courses, no experience, just write. And read. So that’s what I did. I wrote whatever came to mind, with no judgment, just me and my ideas. I also read a lot, which helped me recognize what works/doesn’t work and why.

I wrote every day, learning as I went, and in three months, I had a completed first draft of approx. 60,000 words.

This is another key advice from Mr. King. Leave the story alone for a while and write something else, most preferably, something completely unrelated. I had an idea for a sequel, so I started writing that.

I’d read over and over the importance of getting feedback for your work. Since I live in Germany and knew no other writers, the only way for me was to join an online critique group. I chose Scribophile. This site lets you post your work for critique, as long as you critique others. It works on a point system – the more you critique, the more points you get, and the more you can post. It’s also a great site for networking with other writers, learn about the craft, and get tips on querying and publishing.

Critiquing others really helped me further learn what works and what doesn’t. And getting different points of view on your own writing is priceless.

There are other ways to get feedback that don’t involve this site, like finding a critique partner on Facebook, Twitter, or out in the real world. Just get someone to read your work and return the favor, preferably another writer. Your writing will only improve.

If you want more information on this, you can read my posts on how to give and receive feedback.

6. Go back to your first draft and revise

My first draft rested for about two months and during that time I learned a lot more about writing, so I could see how terrible my draft truly was. When I had originally finished it, I thought I just needed to get some feedback and it would be ready for publication, but I was so wrong. There was a lot of work to do.

Something I learned while my draft rested was the importance of plot structure and character arcs for a well-rounded story. Many people don’t believe in structuring their novels, feeling it’s better to let it flow naturally, but I disagree. Learning about all this and incorporating it into my novel helped it become so much better. It also gave me ideas for new scenes/dialogue to add layers to the story that it originally lacked.

After learning about structure, I analyzed novels I read and could really tell how they could’ve benefitted from a better structure. Also, all movies use the three-act-structure and no movie is the same, so why not use something that’s been tried and tested before?

The best resource I found on this subject is Helping Writers Become Authors. It offers a wealth of information.

I revised my novel using what I learned and posted one chapter at a time on Scribophile. In the end, five people read the novel from start to finish and gave me great feedback along the way. The novel is all the better because of them.

8. Let it rest and revise again

Stephen King sends his second draft to friends for feedback, then revises a third time, and sends it to his editor. Since in this case, the editor is me, after I finished the whole Scribophile process (which took around six months), I let it rest and concentrated on building my platform, which is a whole other topic.

The time in between drafts helps to see the novel with fresh eyes. For my third draft, I focused on voice (making characters sound different), scene structure, and issues brought up by my critique group (I had fixed minor things within each chapter as I went along the process).

Some writers may stop after the third draft and start submitting to agents and publishers or self-publish, but since I was a newbie, I wanted other opinions from normal readers. In my case, my novel had been read in pieces, and I wanted to know how it flowed when reading like a normal novel. I gave the novel to my husband and some friends to read.

For future novels, I would go from the second draft directly to beta readers (who would be a mix of writers and non-writers), then the third draft would be the “final” version I would submit.

Since my friends know nothing about writing, they couldn’t give me much advice other than what they liked/didn’t like. Here is where I had to distinguish between what is personal preference and what is actual confusion/bad writing. In any case, the feedback I got helped me get new ideas and fix some problems I hadn’t noticed before.

After I revised, I read the whole thing aloud to test how it flowed and proofread. Then I felt I was ready to submit to agents. At this moment, I’m in the middle of more revisions since, on my first query round, I got no requests, and that’s a BAD thing.

The whole process took me about a year, because of all the waiting in between.

The most important lessons I learned are:

You need patience if you want to create an end-product you’re happy with.

Revision is part of the process (and it’s never ending).

My biggest advice is to work on something you love. That way you’ll never get tired of looking at it (and you will look at it A LOT).

If you want more information, check out my Pinterest page, where I’ve collected posts from different sources on the craft of fiction writing.

How did you write your first novel? And if you’re starting out, do my tips resonate with you? 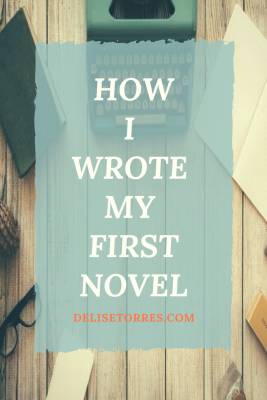